Boundary of a Memory

I has been craving a glitter for the longest time, I finally gave in and decided to wear what I think is a seasonally appropriate glitter. China Glaze, Boundary of a Memory is apart of their collaboration with the movie (based off the book), The Giver. This is the only colour in the collection that captured my interest.

Boundary of a Memory is a densely packed full coverage glitter, it is made up of black, silver and copper glitter. The copper glitter is not easily visible on the nail, however it breaks up the black and silver glitter and warms up the polish as a whole. 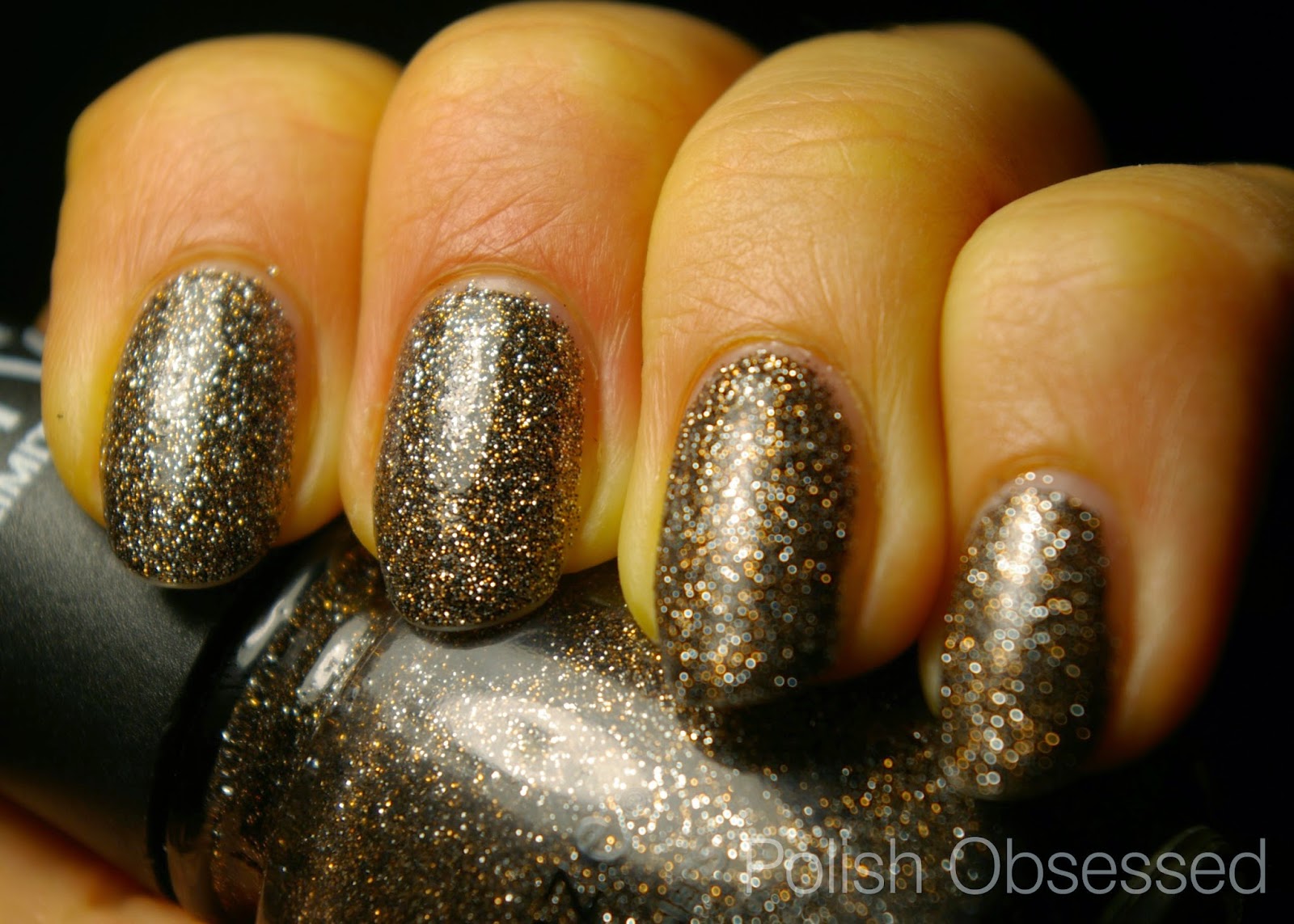 Surprisingly I only needed two coats for full opacity! The formula was a bit thick, and thickened up the longer the bottle was opened, I would recommend thinner be incorporated into the polish between uses. The formula wasn't the worst to work with but it wasn't amazing either. The good thing about glitters is that it is easy to fix and manipulate the glitter on the nail to fix any imperfections or mistakes. 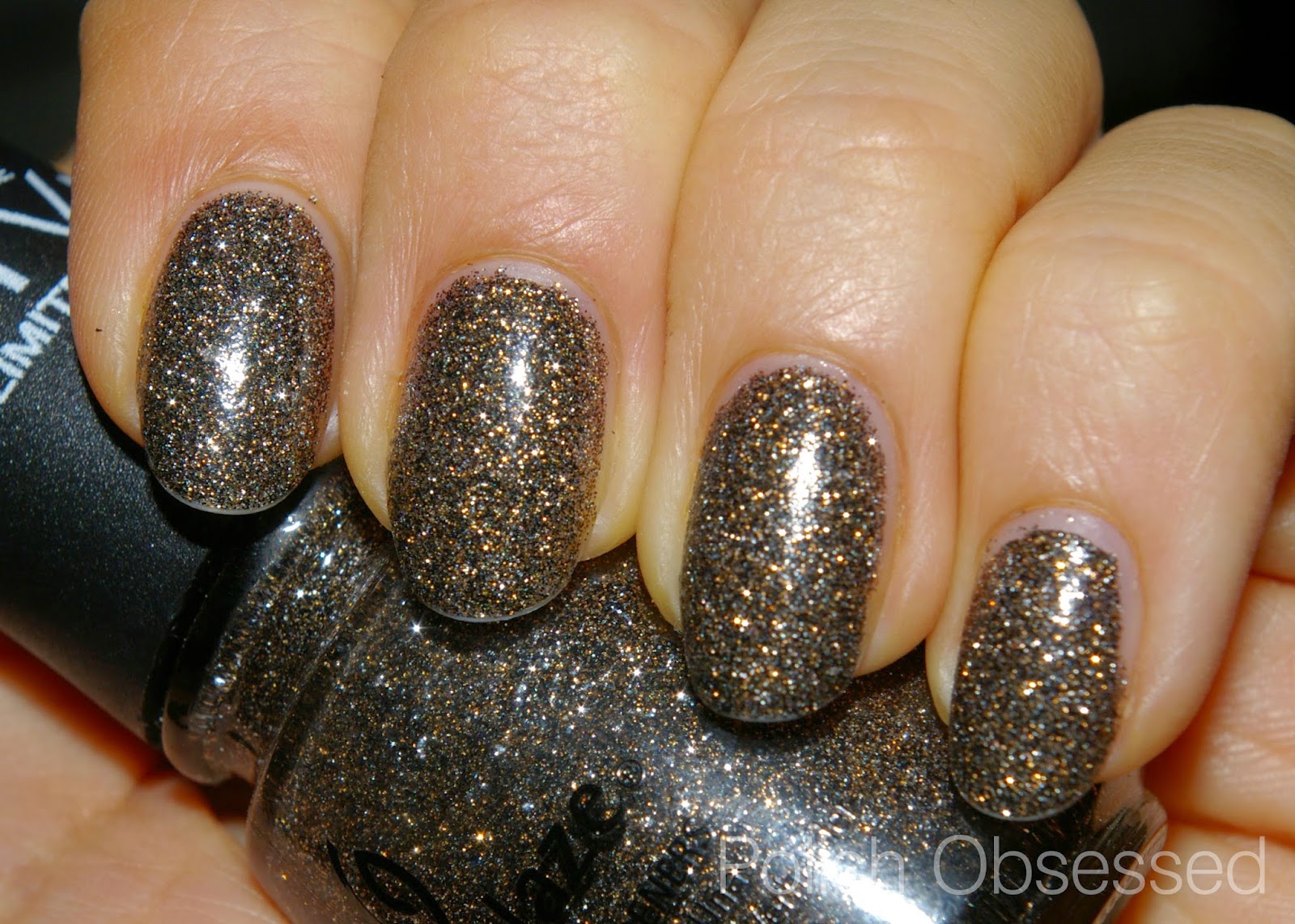 On it's own it dries to a gritty, matte-like finish. I applied one coat of Seche Vite over top to add some shine. The glitter did not soak up the top coat which is good, and I was happy with the shine achieved, however you may want to add two coats if you want super glossy glitter. 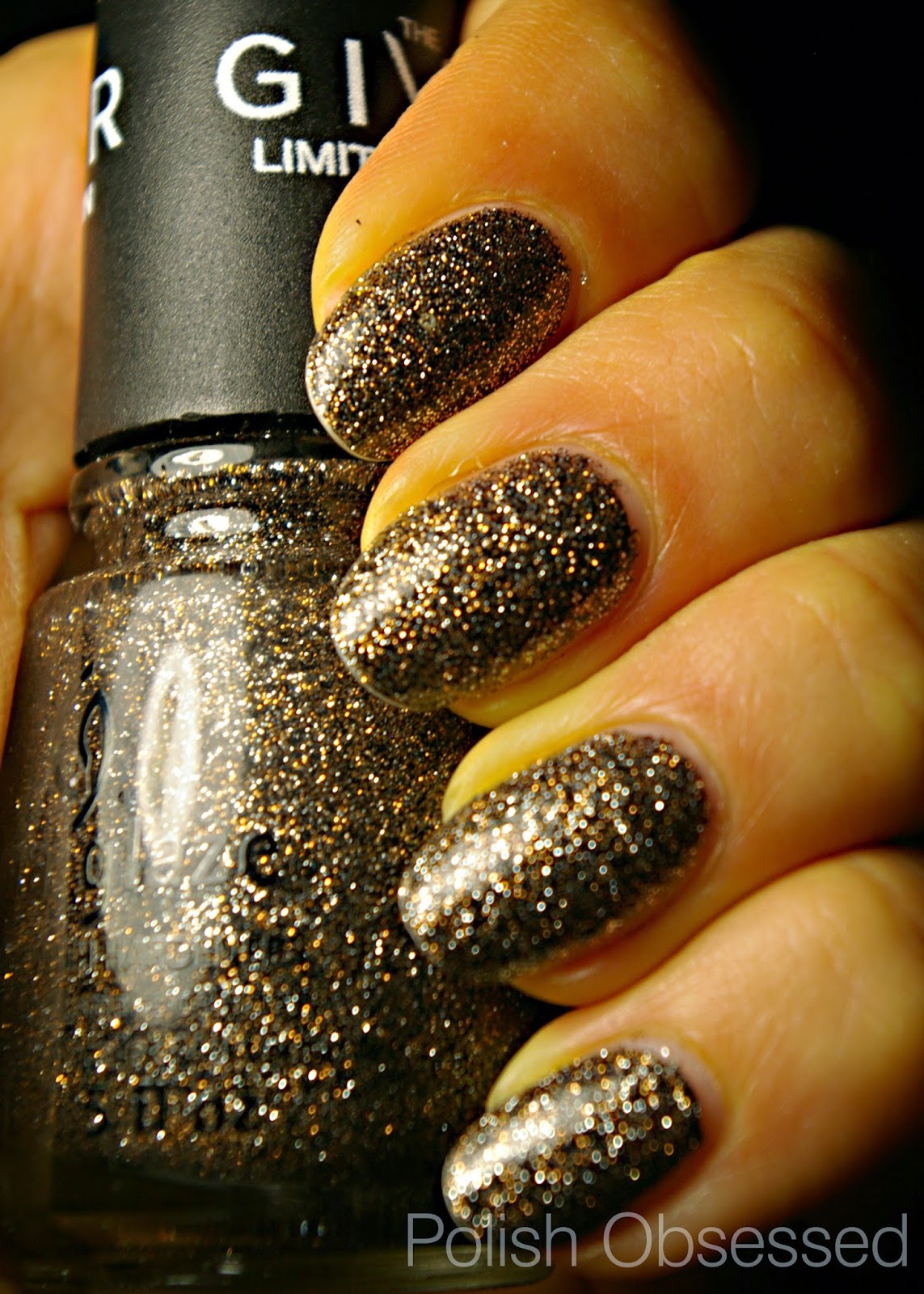 I really like this glitter because it's sparkly but kind of dark, and I love that full coverage is achieved in two easy coats with fast dry time. I am currently on day three of wear and have gotten a few small chips here and there mostly due to my hands evening constantly wet in preparing food/washing dishes.
Posted by Danielle at 9:30 AM 1 comment:

First official fall jade of the season! I couldn't decide whether I wanted a nice neutral cream, a blingy glitter or a colour shifting duochrome. After having a quick look at some untried I had laying around I decided China Glaze, I Choo Choo Choose You would satisfy at least two of the options I was craving for my nails. 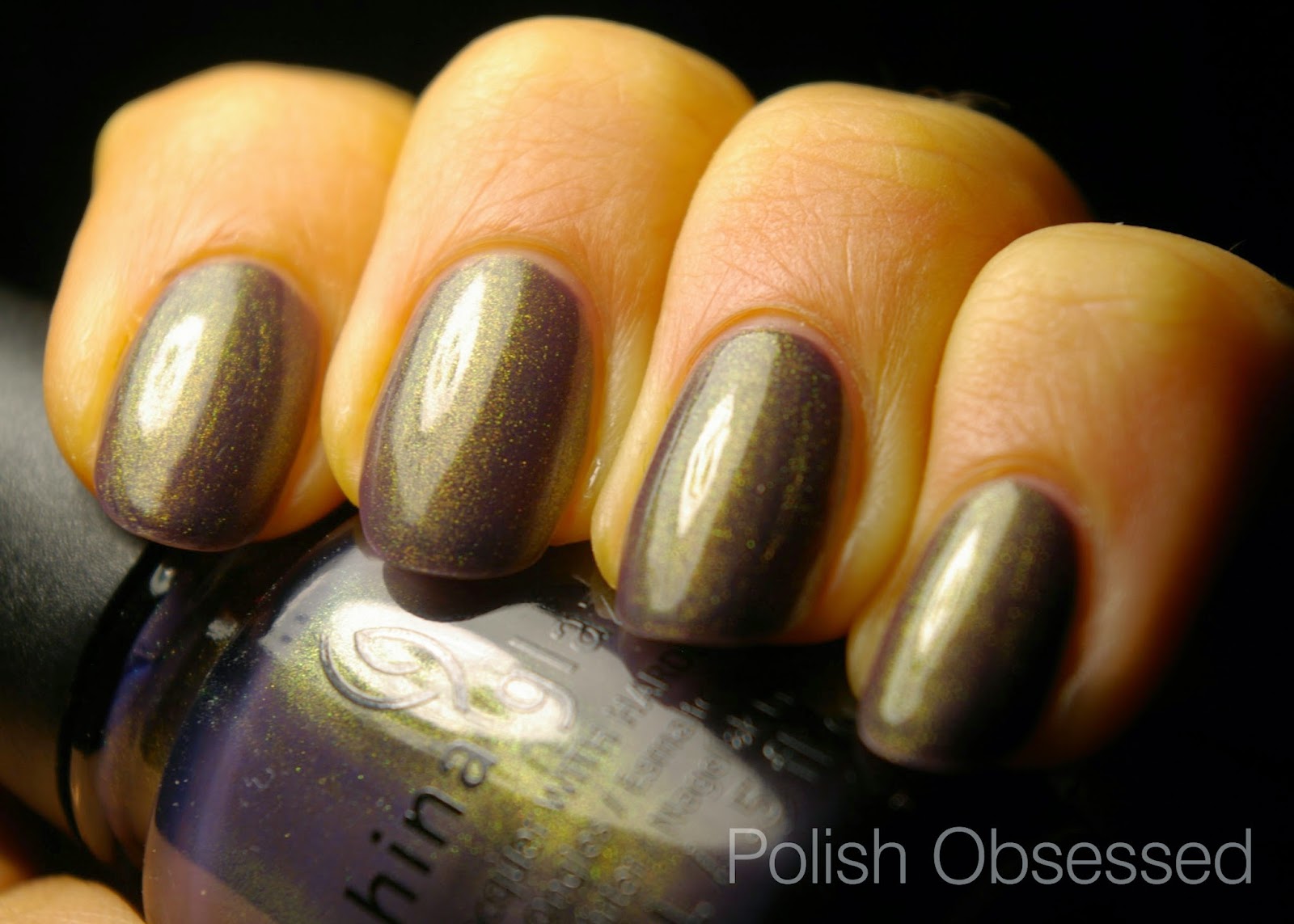 I Choo Choo Choose You is a deep, dusty purple/mauve shade, what makes this polish so special is the duochrome micro shimmer that shifts between yellow, green and red. Unfortunately this was super hard to capture in a photo, but I did try my best. 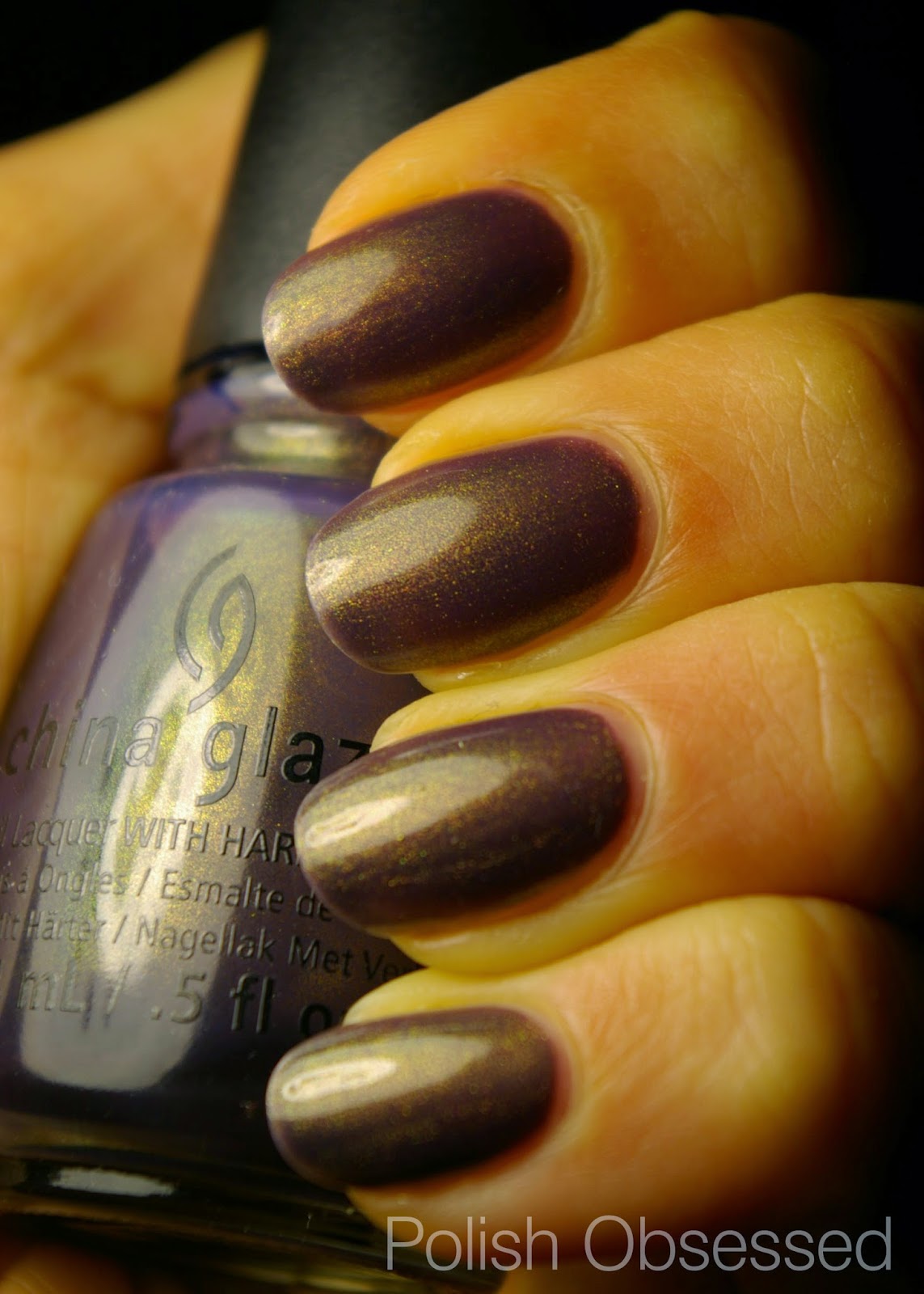 The formula was pretty perfect, although the first coat had me worried. Old school traditional duochromes (think Sally Hansen Prisms) tend to be really thin and sheer, it's usually best to layer them over another colour. The first coat was sheer but applied well and surprisingly the second coat evened everything out to full opacity. 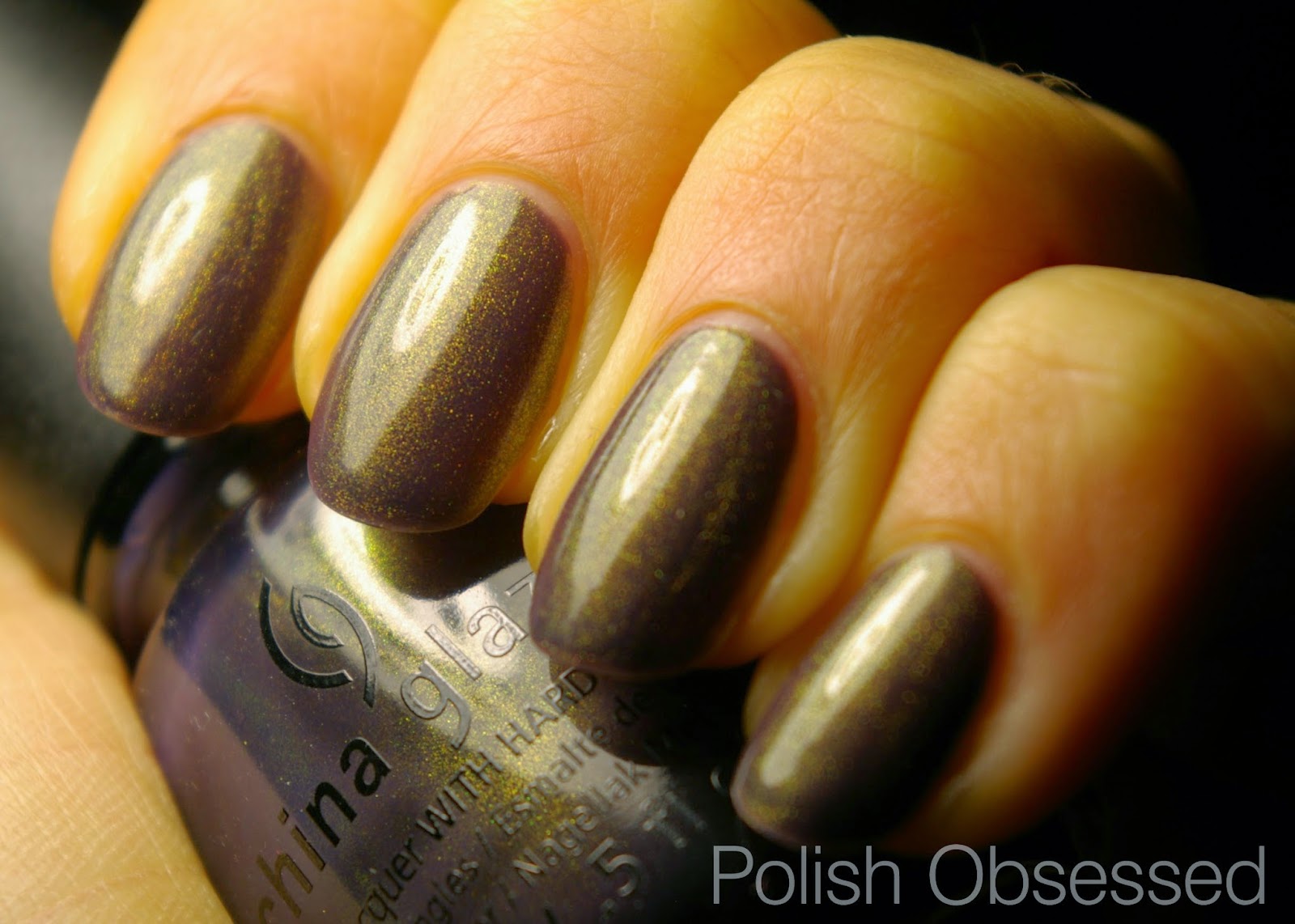 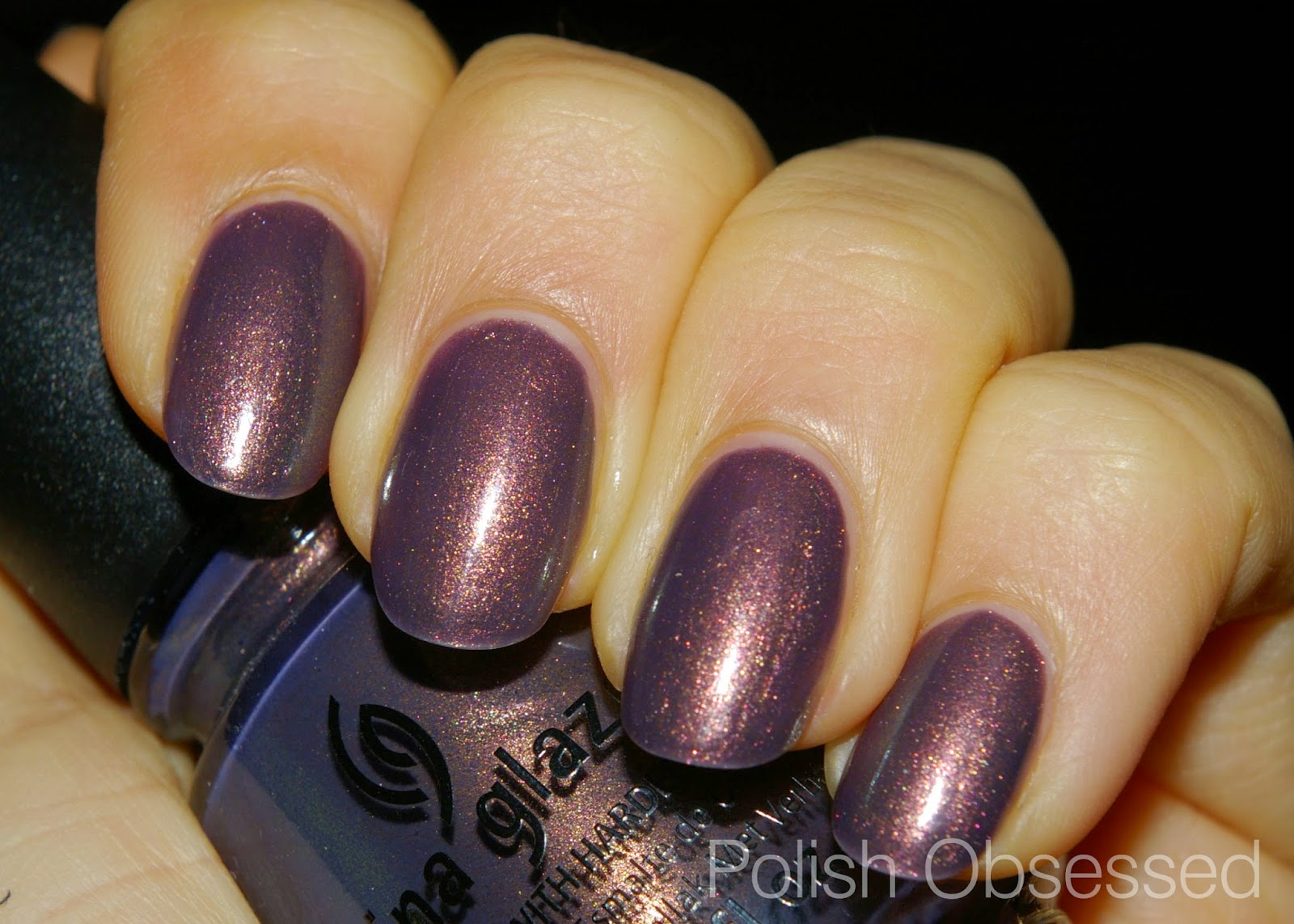 The wear has been fantastic, which is a welcome change from the spring and summer China Glazs polishes I purchased. It's nice to have a polish not chip after just one day. This is such a great shade and I love the shimmer colour shift. I'd like to have a second look at the All Aboard collection, but if you only can pick up one, I would highly suggest this polish!
Posted by Danielle at 10:04 AM 2 comments:

I haven't been hauling as often, which I actually prefer. I have more than enough polish but sometimes I can't help myself! A polish has to be truly special for me to but it these days, check out what I picked up last month.

Trade Secrets had a bunch of OPI and Essie polishes BOGO, so I picked up these two jellies apart of their Sheer Tints collection released this past March. I would say these are more of tints than a full opacity polish, I hope to have fun with these two! Left to right, Don't Violet Me Down and I Can Teal You Like Me.

Both polishes have the same sheer gloss and translucent finish, I Can Teal You Like Me is blue and Don't Violet Me Down is purple. I would have picked up the other two in the collection as well, but the pink was out of stock. I regret now not getting the yellow shade, I’m Never Amberrassed. 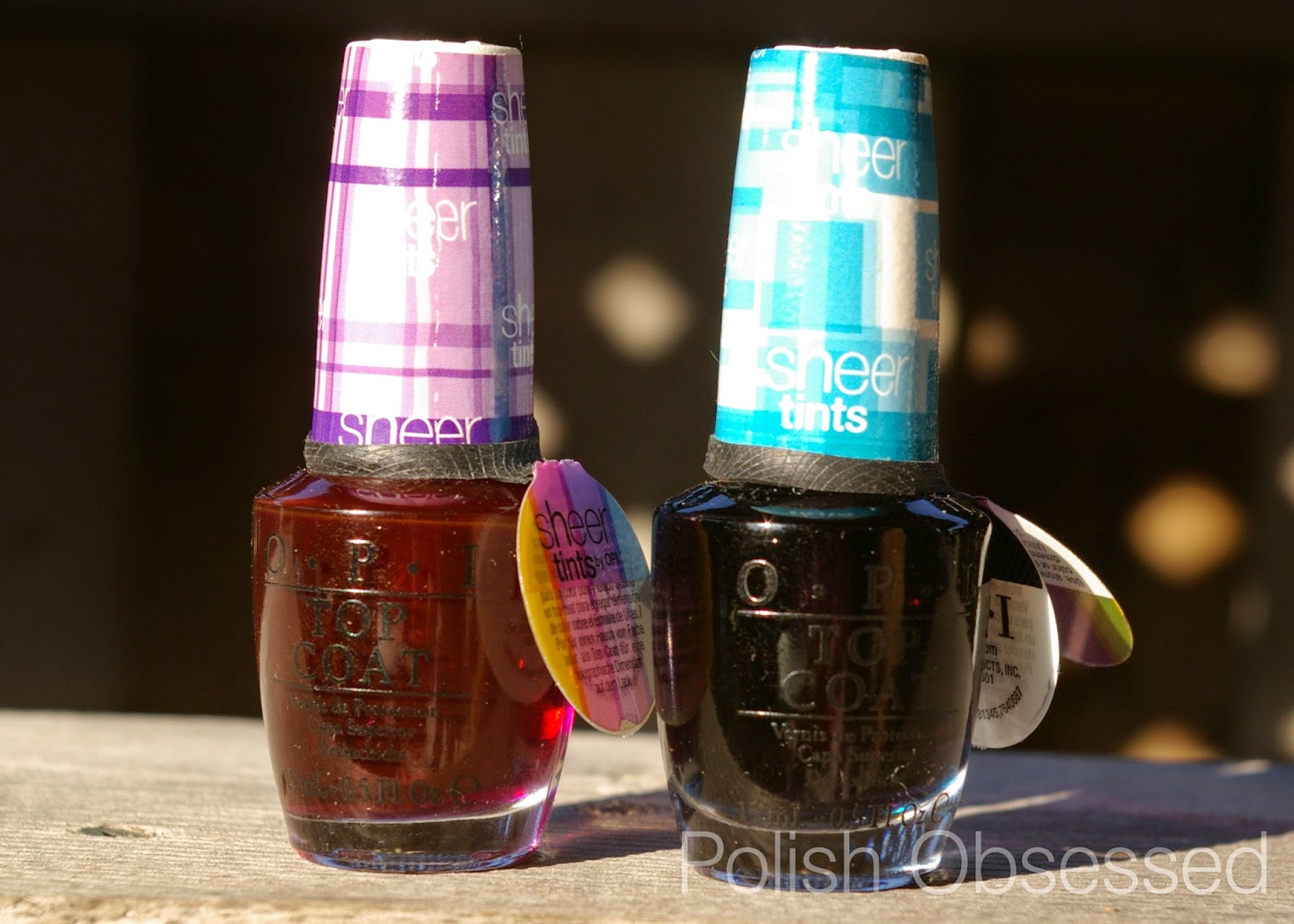 Next is Sally's, they had an extra 50% off their sale polish so I picked up this funky glitter from Finger Paints, Red, White and Hue. I'm certain this is a patriotic polish, but I see nothing but nautical! And Rocket Popsicles... 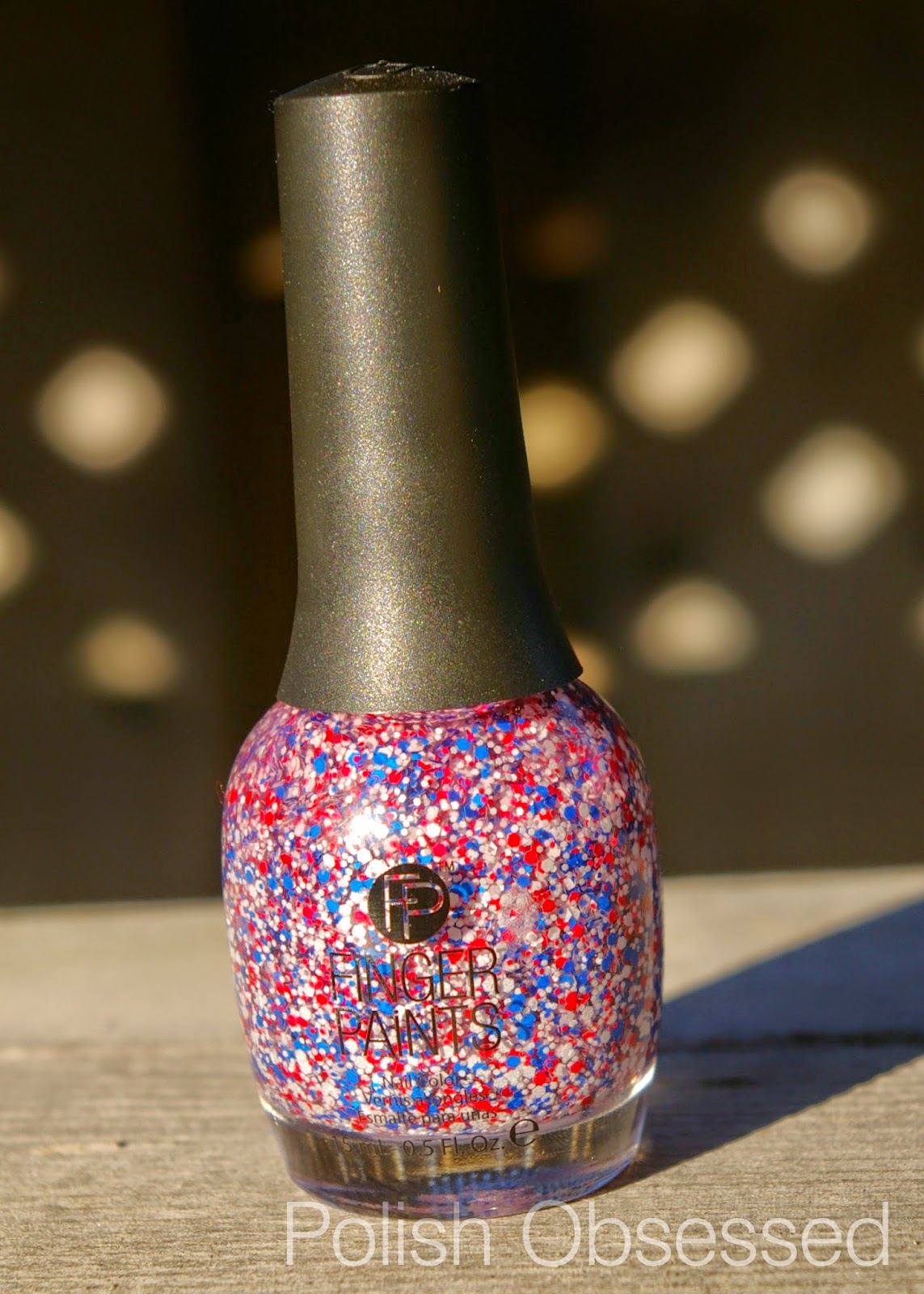 Another purchase from Sally's was OPI My Voice is a Little Norse, a holo glitter. It appears to have a slight grey base and when completely dry appears to have a gritty, almost textured finish which I totally dig! I think this would look awesome with a top coat as well. I think I actually love this one more in person that I originally thought I would! 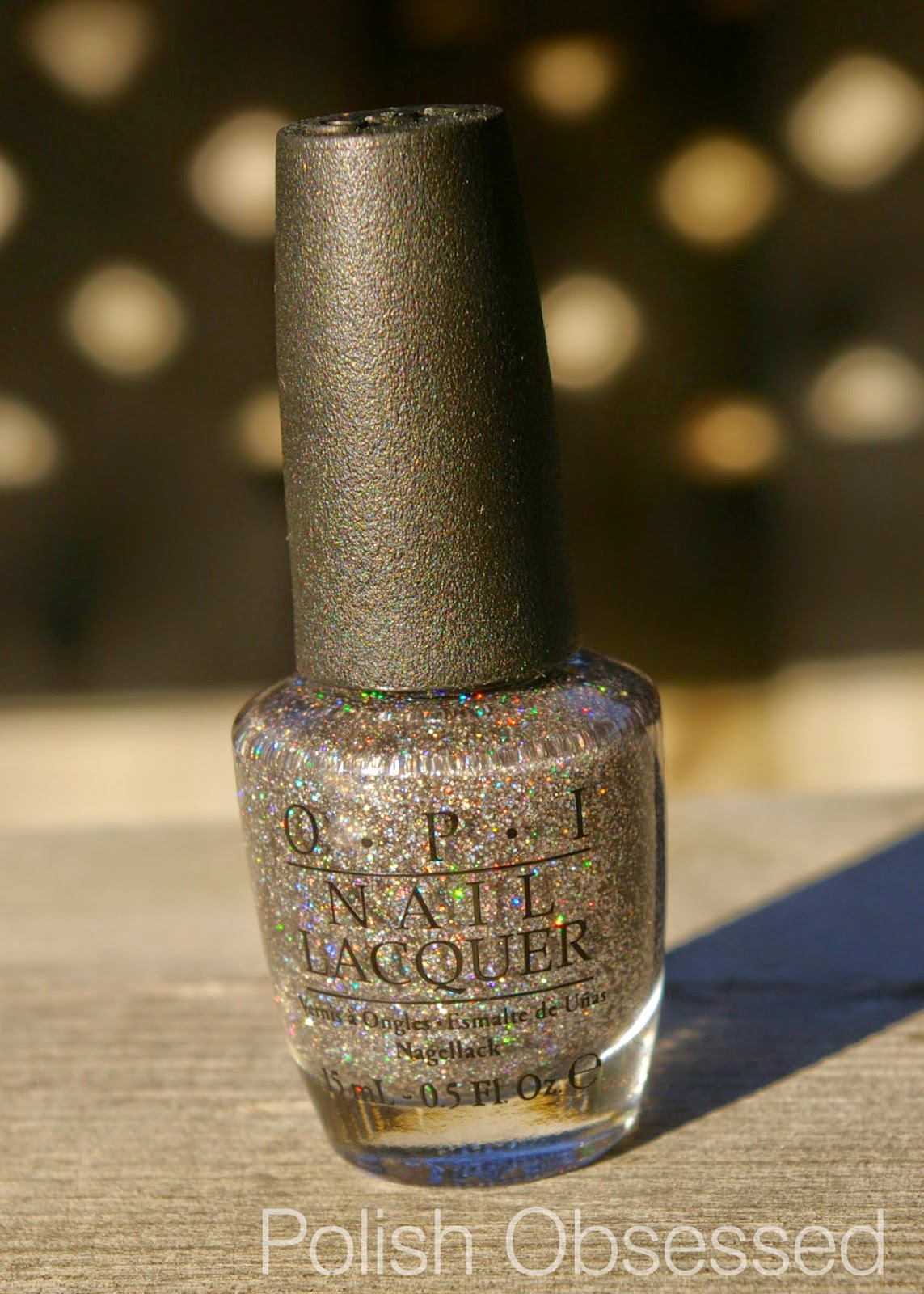 This next polish was purchased in Rite Aid at the end of August, my first Halloween themes polish of the year! This is Sinful Color, Cauldron Couture. At first glance I thought this was a black creme with different sized hex and irregular shared green glitter. It wasn't until I got home that I realized that there were also various sized and shaped Black matte glitters as well! Score! 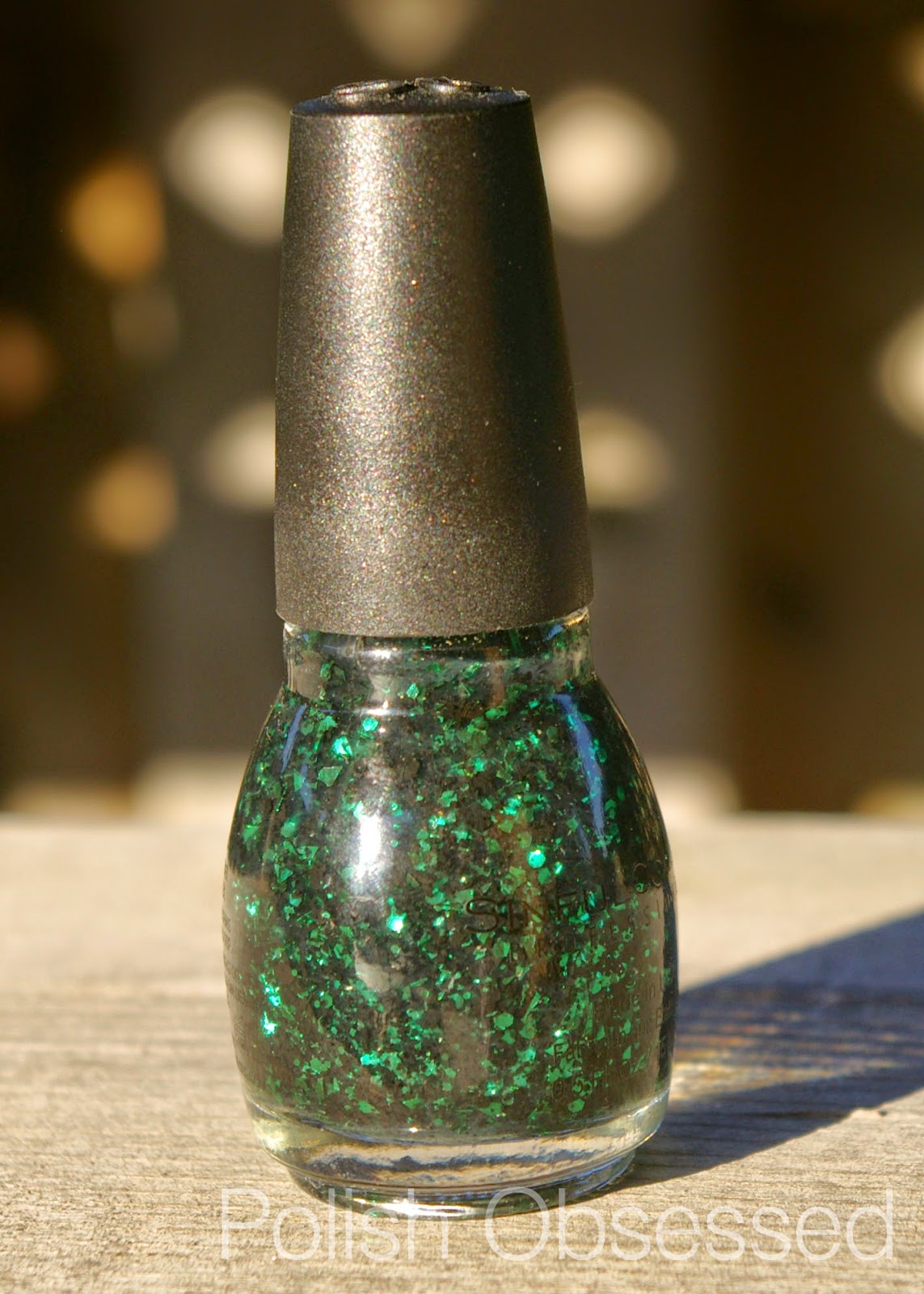 The last polish I have to share is one my boyfriend surprised me with one night, what a sweetheart ^_^ This is apart of Sally Hansen's new Miracle Gel line. This is Style Maker, a shimmery Green shade, that appears to have a slight duochrome in the bottle, but not so much on the nail. 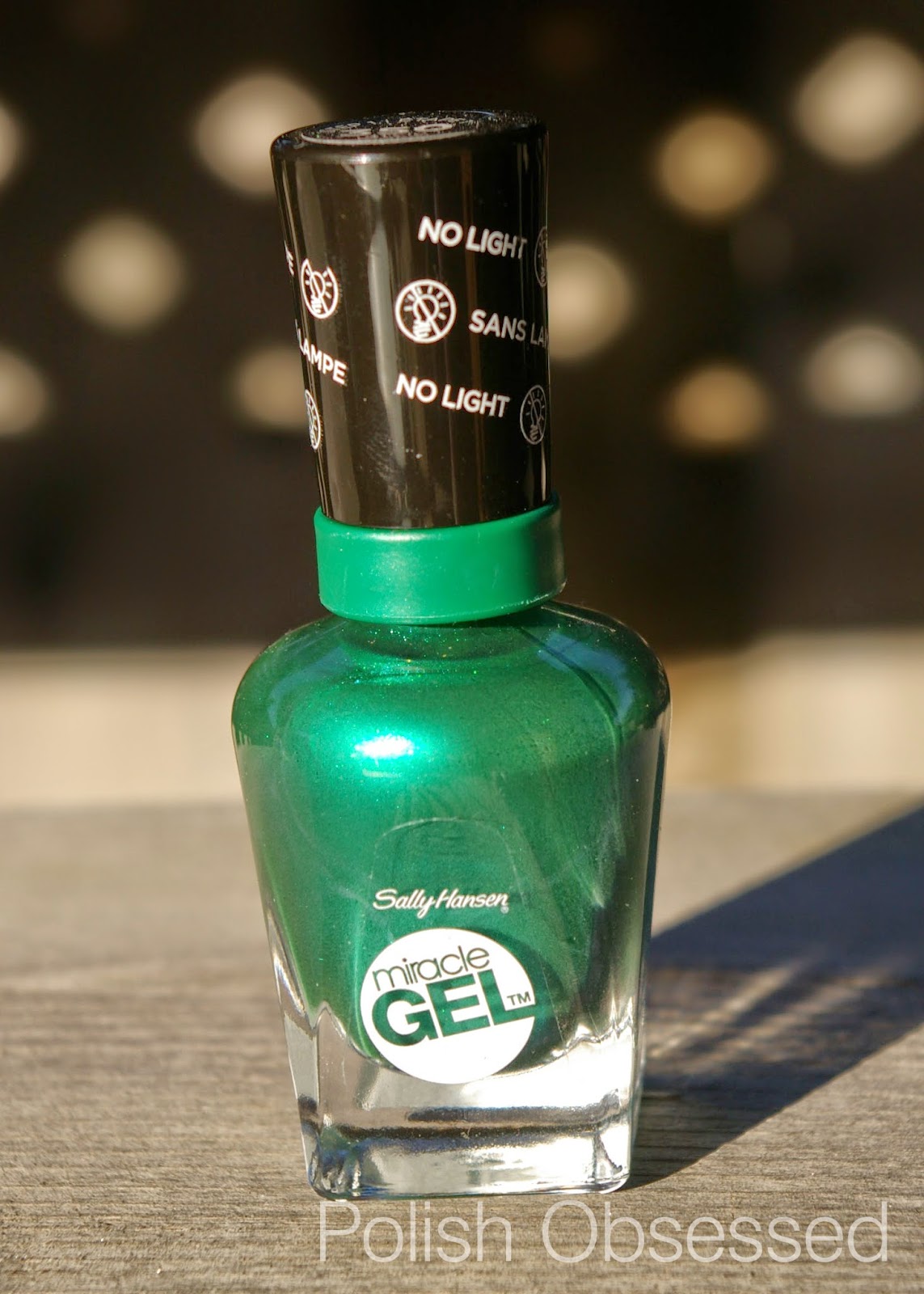 I'm not too familiar with this collection or the idea of it being a "gel" polish if it does not need curing. My boyfriend was unaware of this as well, he based his decision on the colour! I don't think I will be purchasing the top coat that is to be used with this polish, simply because it dries on its own, no curing needed, which really makes me this that this is just a big scam. Maybe the topcoat is thick heavy duty and glossy like a gel, but why would they market it to be used together, I'd rather just use the topcoat and use it over other polishes, its a cash grab to me. Then again I have not tried either product, so I will have to read up on it any try them for myself before I come to any final conclusions.It just bothers me when companies use buzz words or popular fads to sucker people in to spending more or buying things they don't really need... End rant!

To end this post on a high note, I hope to find some more Halloween shades this weekend when I am across the boarder again, wish me luck!

If you recall from earlier in August, which has been is now a WHILE away, I had a pedi done of Funny Bunny on my toes. At that time I applied a similar shade to my fingers to match. In my opinion these are pretty much dupes of one another. 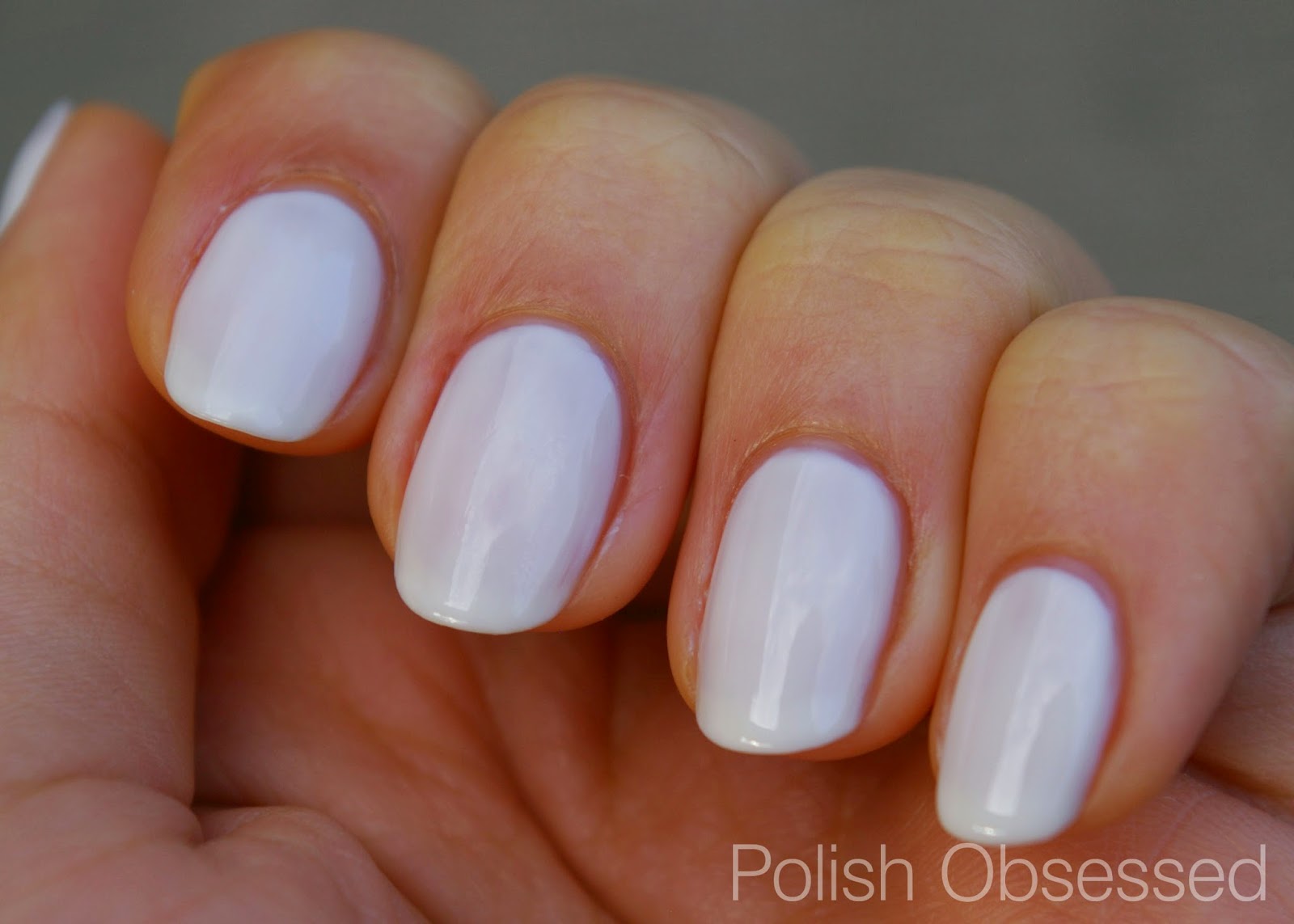 Essie Marshmallow is a sheer and creamy white jelly shade. I love that this shade of white is a jelly, it softens it up a bit and doesn't appear as if I have white out on my nails... not that that is a bad thing, but sometime I just want something a bit softer. 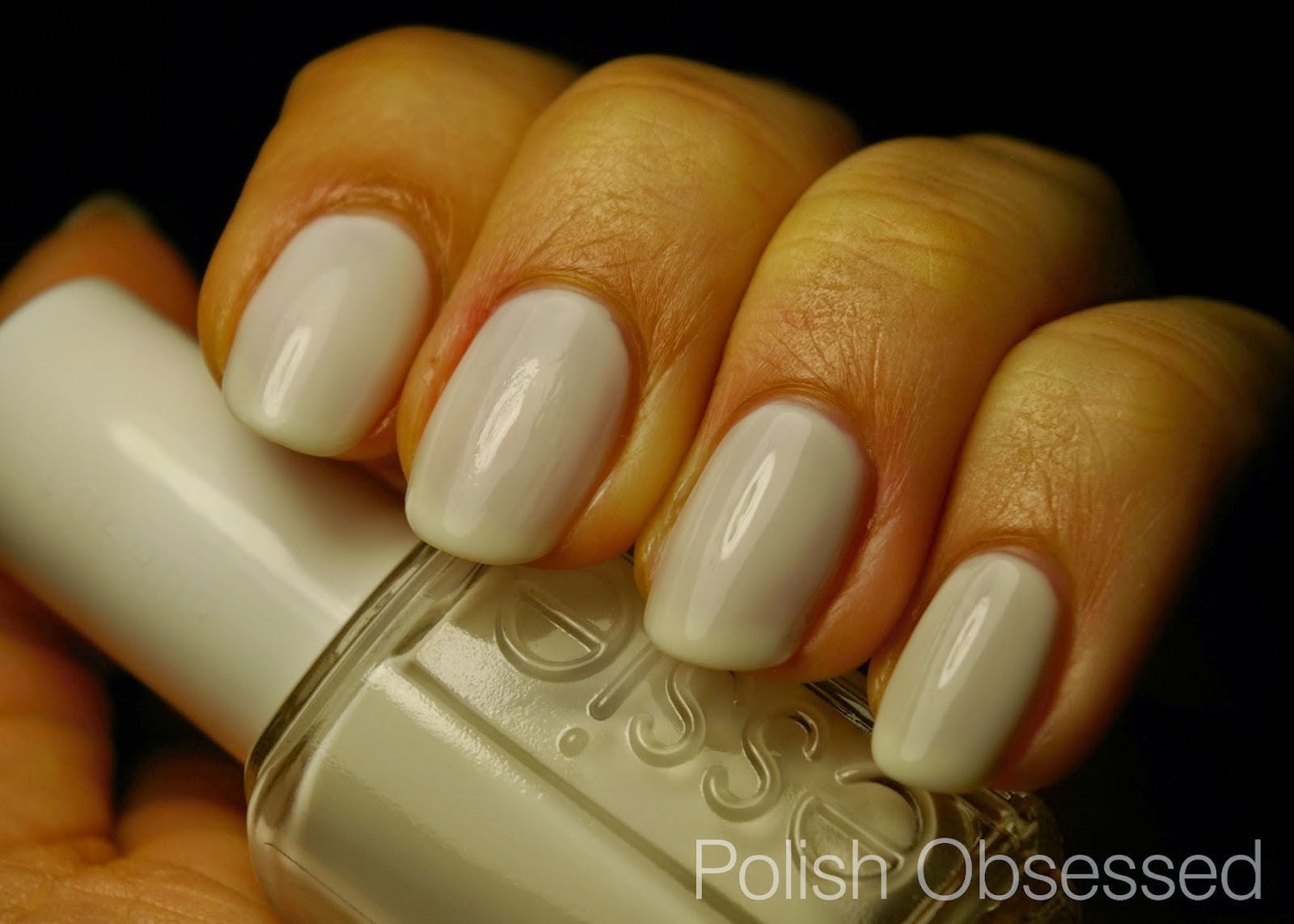 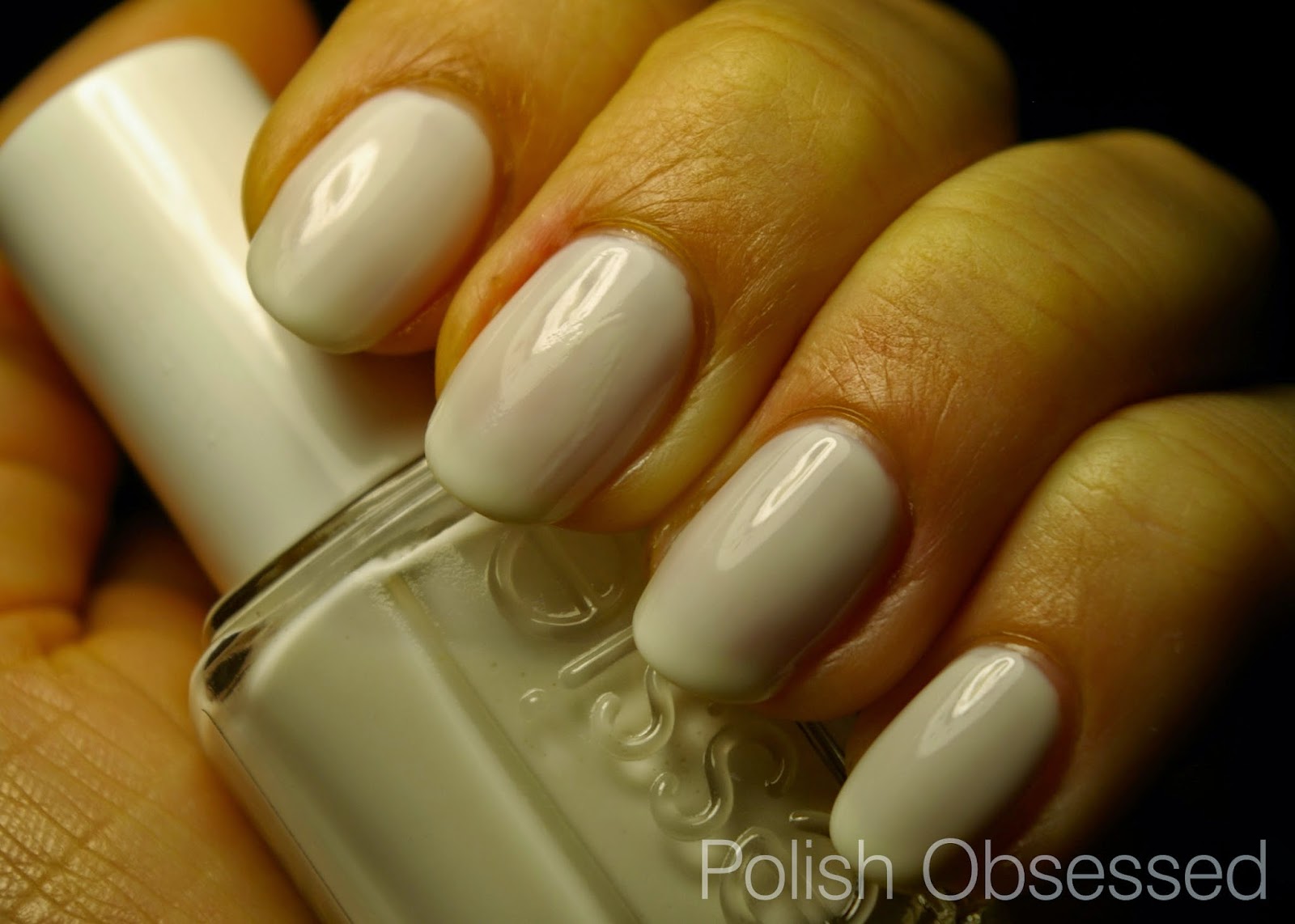 Marshmallow applied well. Since I applied it a while back I can't recall for certain whether I used two or three coats for full opacity. I do remember the formula was nice, I didn't run in to any issues there. 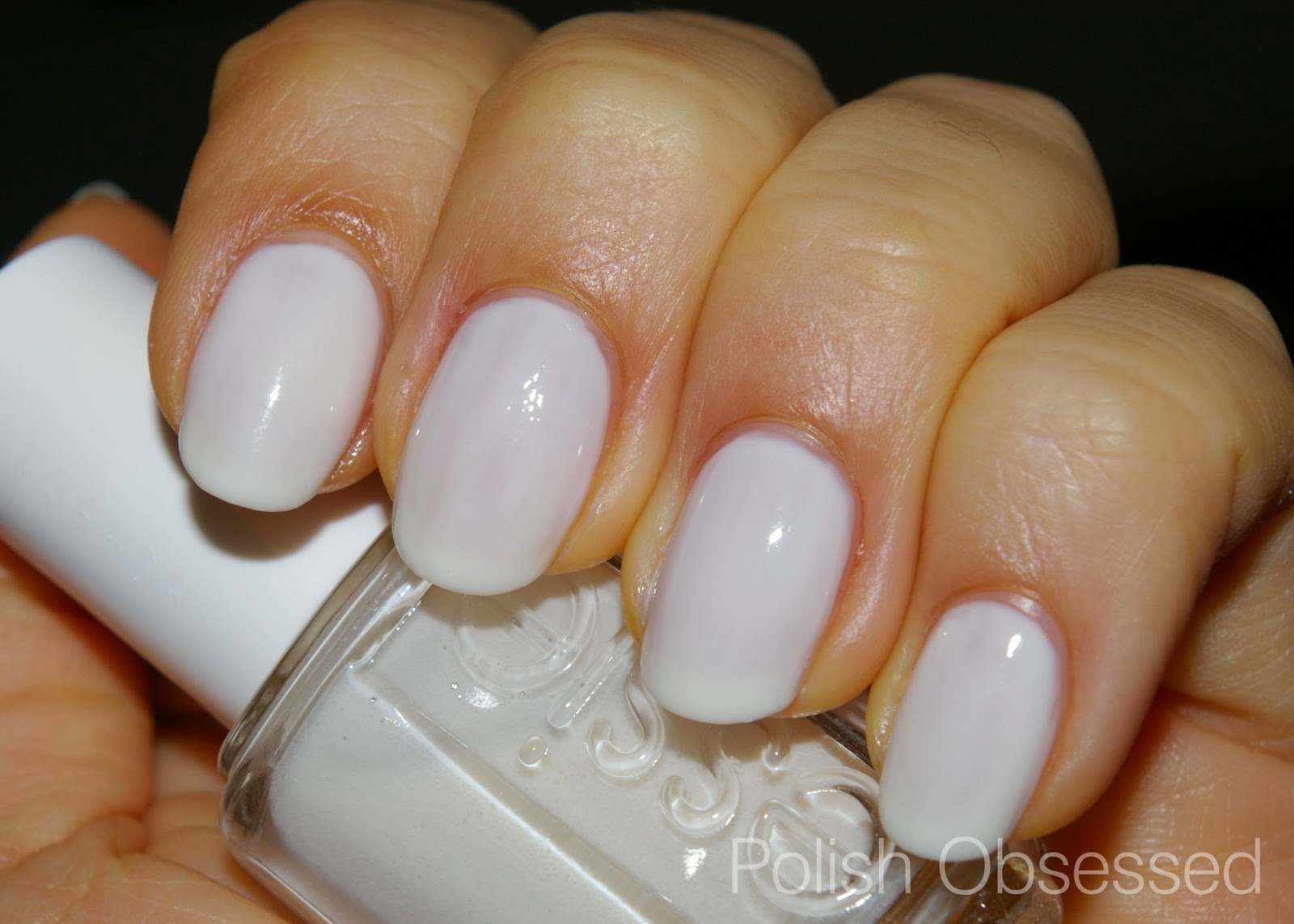 Happy Friday! I got some pretty cool OPI polishes recently apart of the Sheer Tints collection. These polishes are true, sheer jellies. I haven't attempted, but the lady at Trade Secrets who rang me through said they can be built up to opacity. I still find that hard I believe! I would think she was trying to sell me on them but I was already giving her my money at this point, plus I knew what I was in for. Although sheer, you can get some really cool effects with them layered over other polishes or themselves. 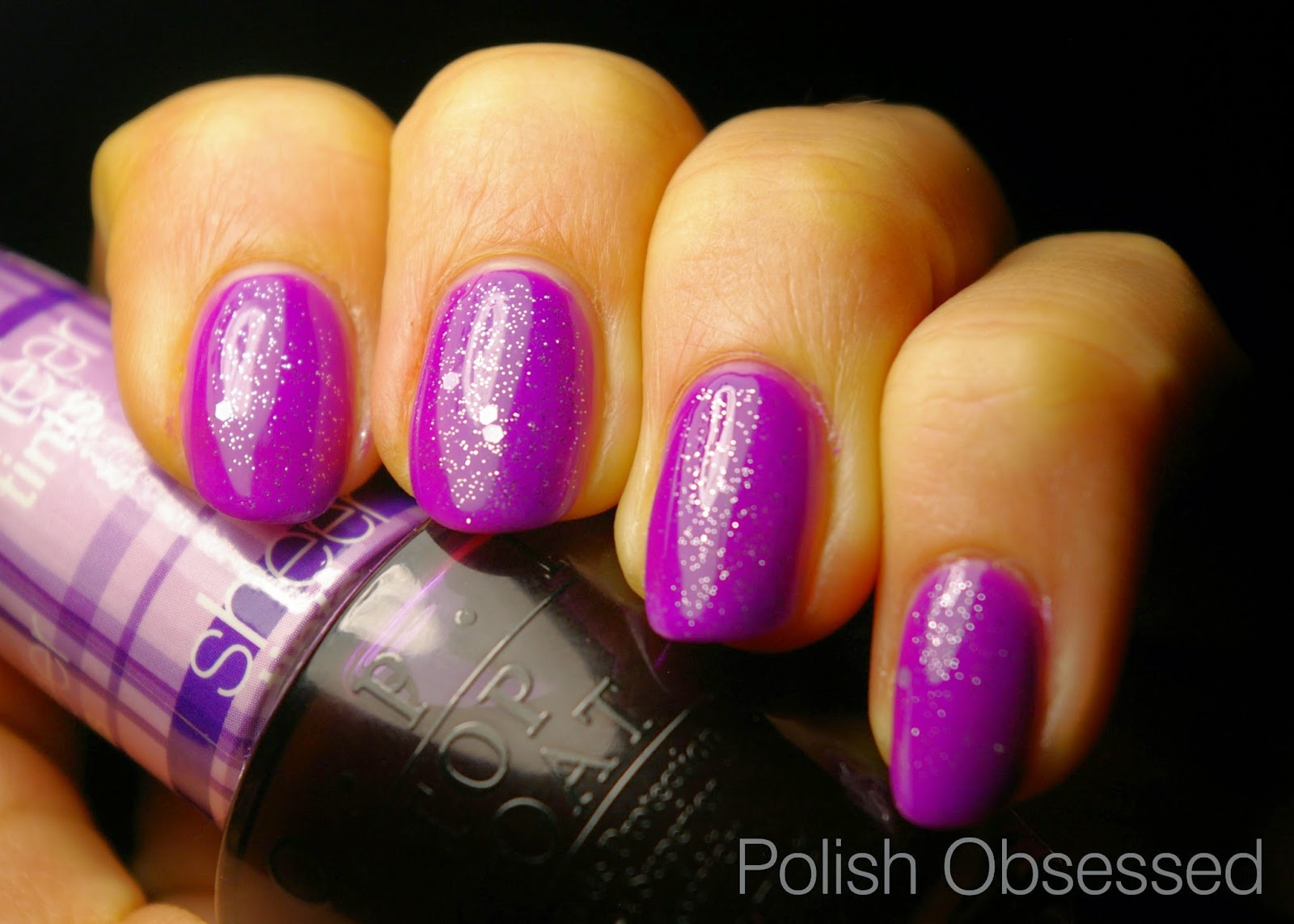 That being said I tried out a jelly sandwich with Are You Jelly? As the base and OPI Don't Violet Me Down over top. Once the glitter was down I layered one thin coat of OPI Don't Violet Me Down on top. The result wasn't as obvious as other jelly sandwiches I have done in the past, however it did grow on me. It added a slight tint of blue to the purple base and left my nails crazy glossy! 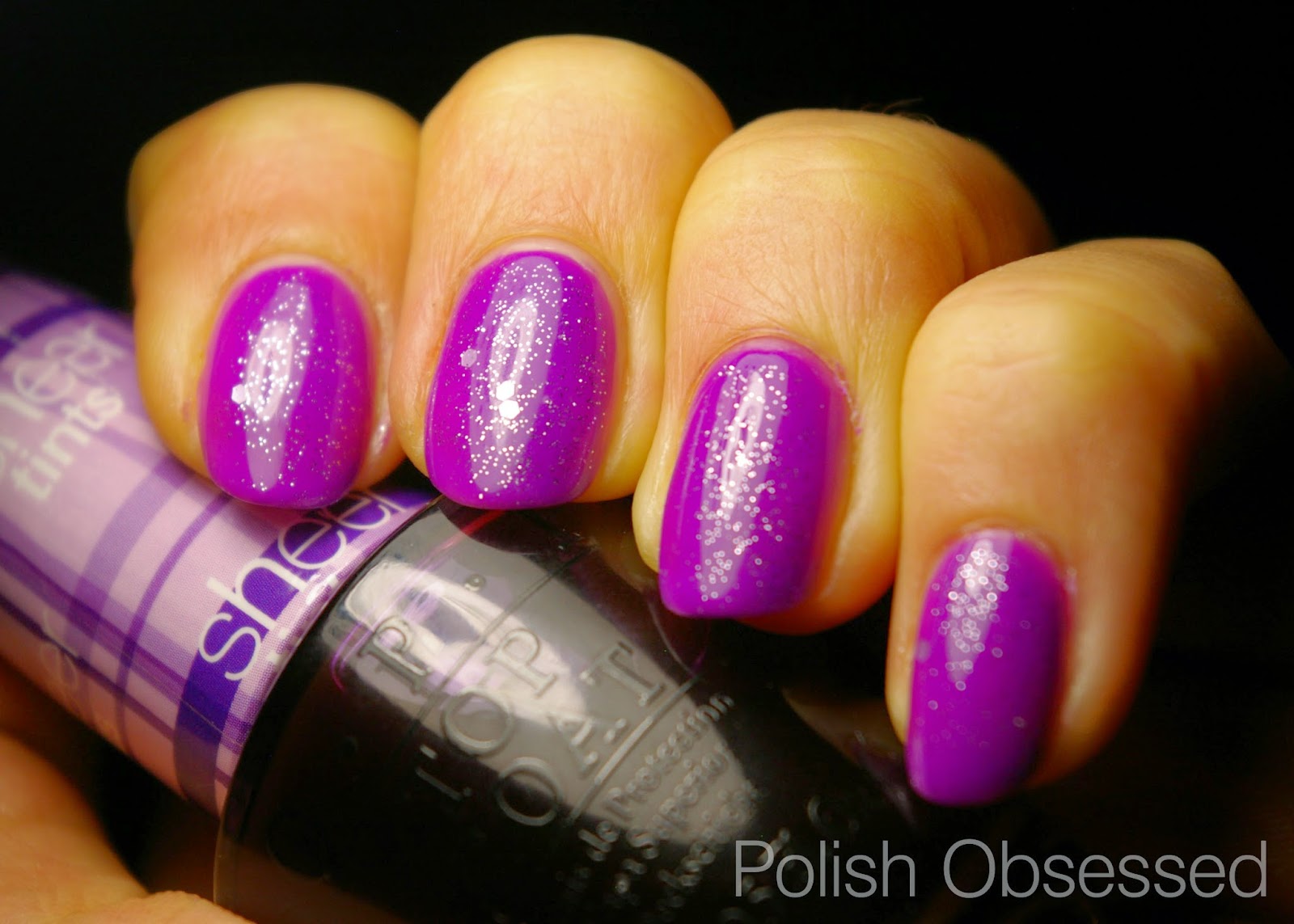 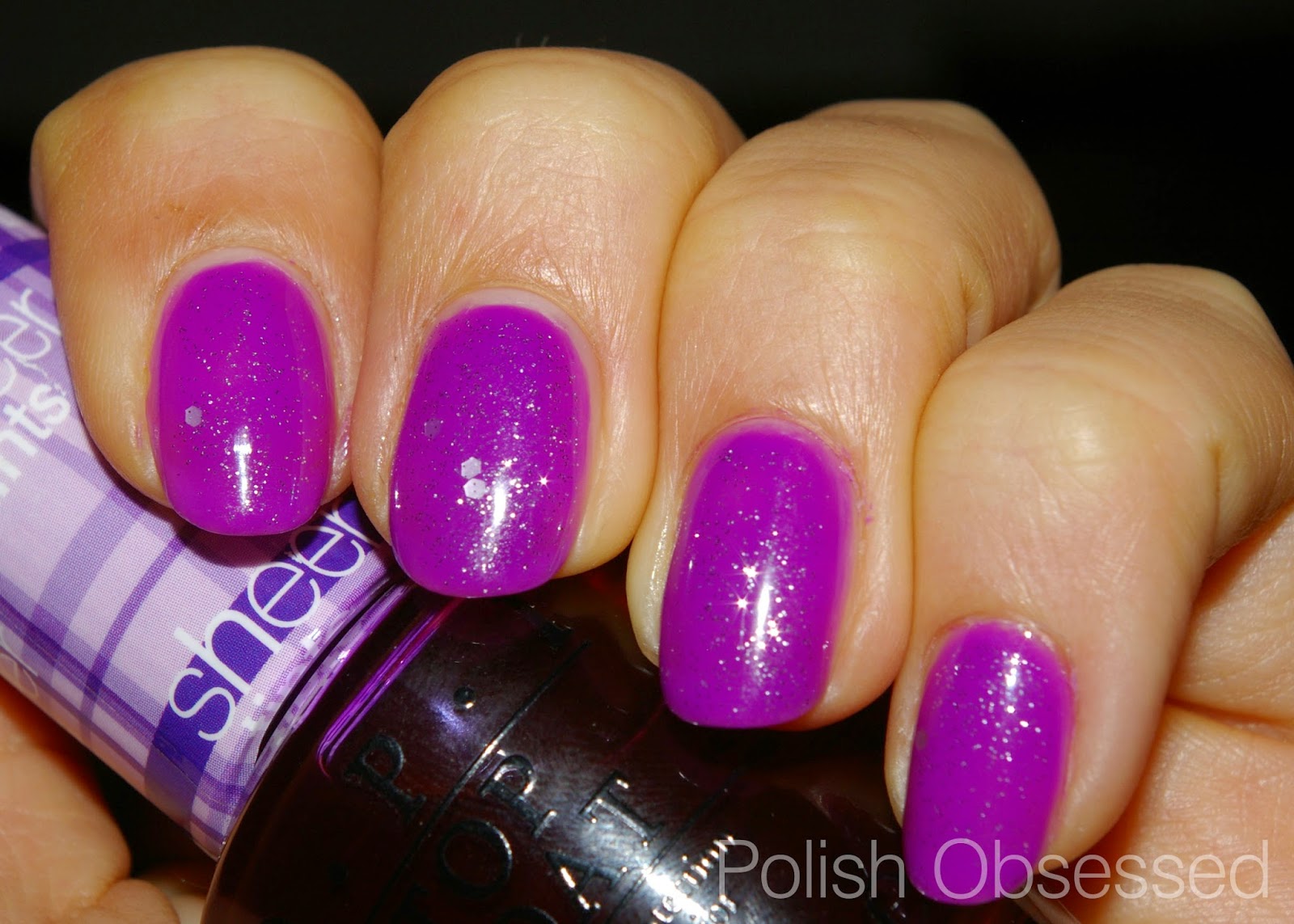 I am loving these smooth and glossy nails, I'm thinking of doing some nail art on top for a concert.

I think this may be my last "summer" mani of the year *tear*. It figures, September rolls around and they weather turns summer-like! 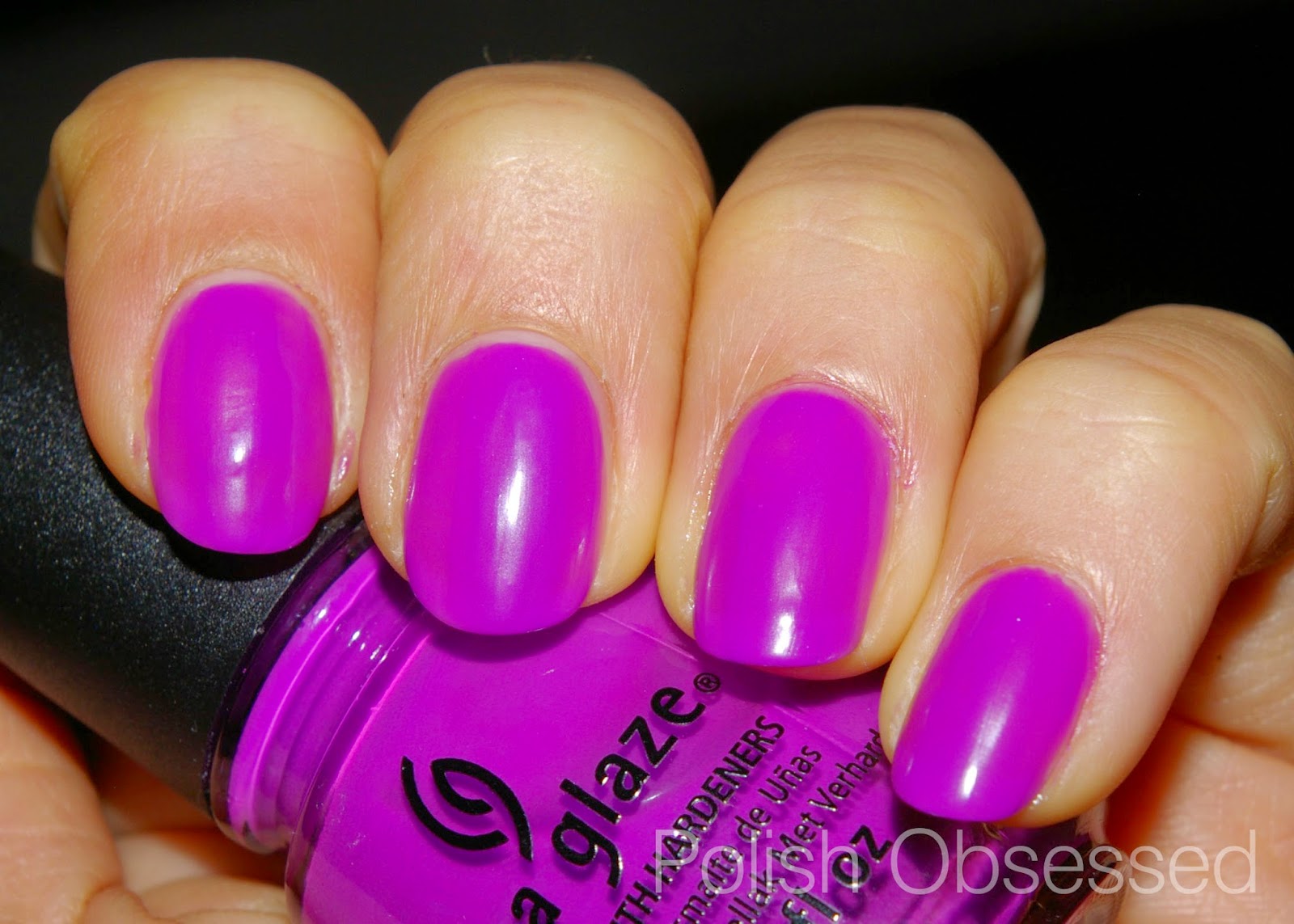 Tody I have a neon jelly from China Glaze's Sunsational collection from 2013, Are You Jelly? In my opinion is not a true jelly or neon. The formula is jelly-like, thin ad sheer, while the finish is a satin/matte once dried, like a neon. The colour is not all the bright or squishy. It is a pretty shade of medium purple, had it dried to a jelly gloss finish I would love it a little more. Three coats are show in my photos without top coat. 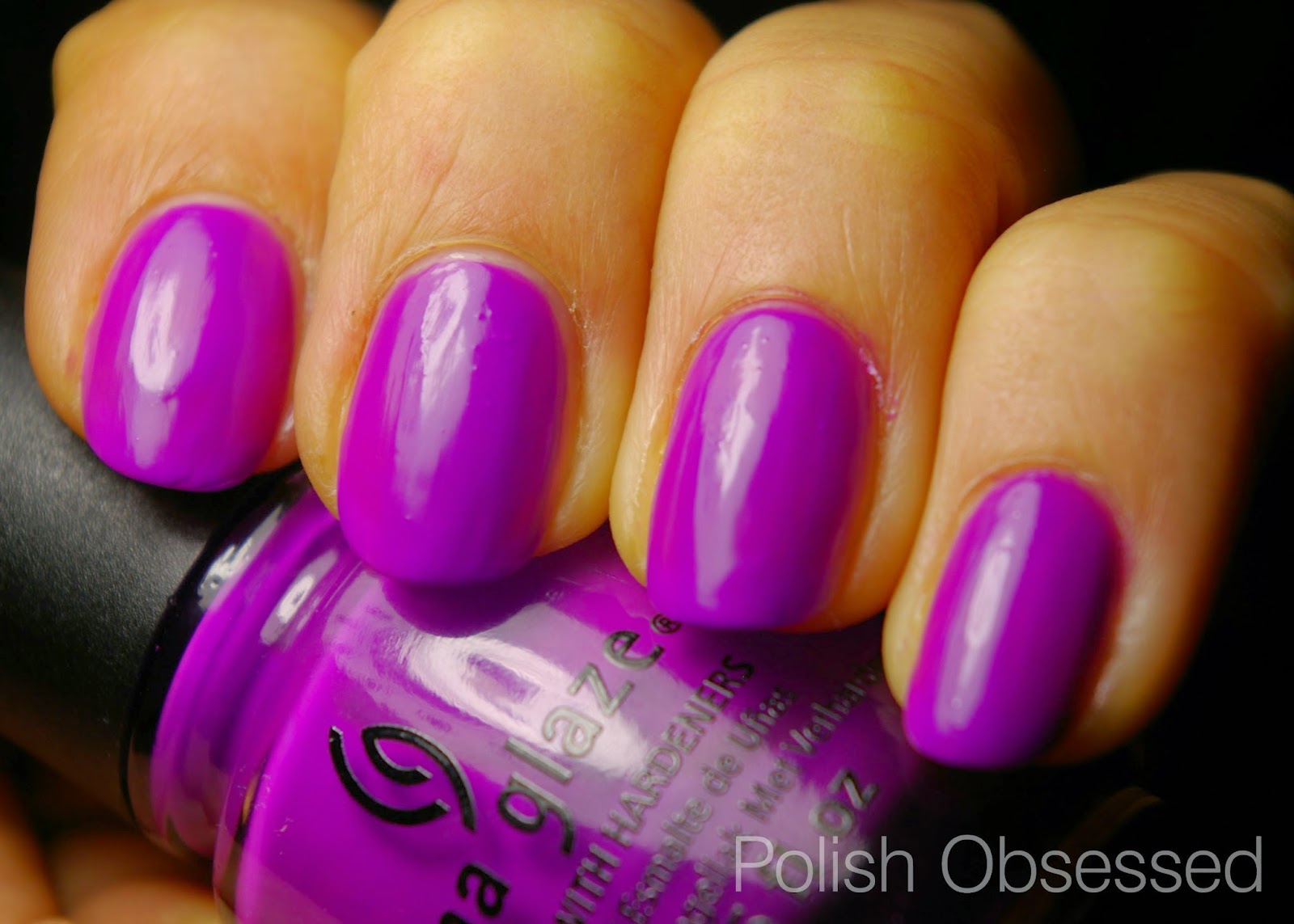 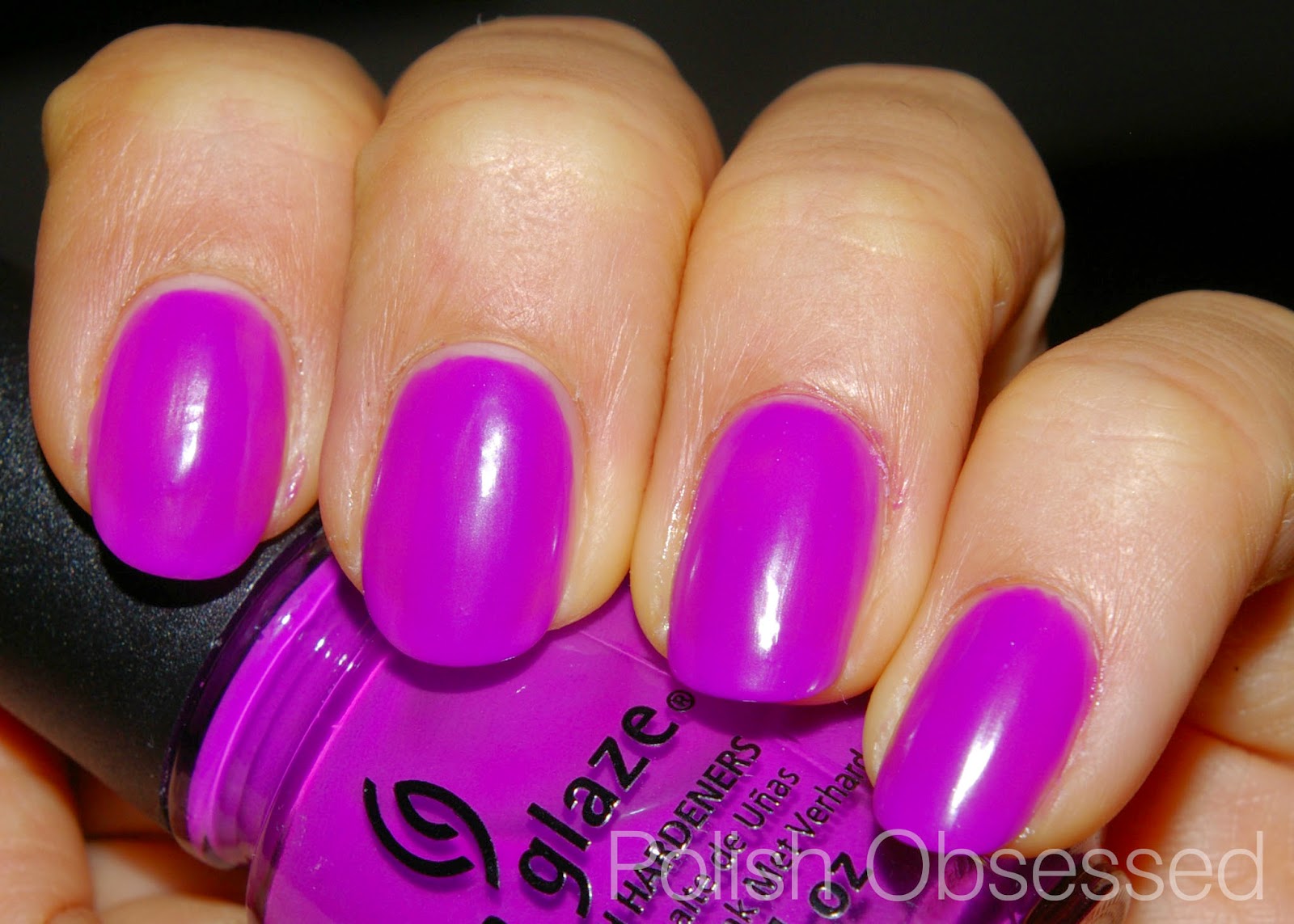 Each coat was streaky, but the third evened everything out. I plan on going some layering with this soon as the base, we'll see what I come up with in my next post!

I have another fun pedicure!! I think I have gotten more pedicures this summer than I have ever! It figures, I get the opportunity to get so many pedicures and hardly get to show them off due to the weather. Luckyily the weather has been good lately, which is good because I have this great pedicure to show off! 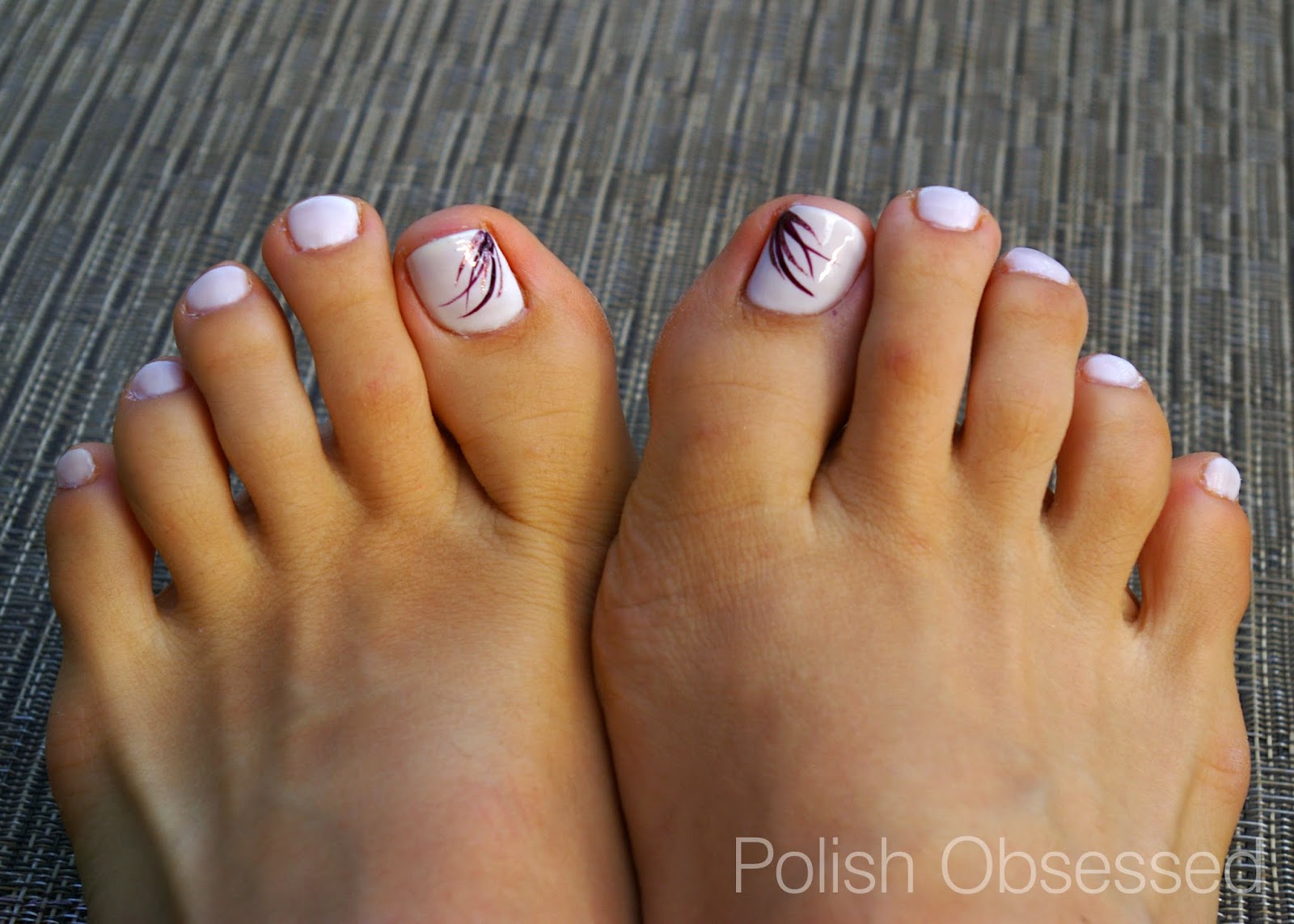 Three coats of OPI Funny Bunny were applied to my toes for maximum coverage, plus I was offered some surprise nail art, yes please! Simple and elegant. The nail tech used OPI Lincoln Park After Dark and China Glaze Strike Up A Cosmo with a stripper brush. I love it! I don't think I have ever had pure white on my toes, but I love it. Funny Bunny has a jelly formula so it is softer than a straight up white creme polish.
Posted by Danielle at 9:30 AM 1 comment:

I have an awesome coral mani to share today apart of China Glaze's summer offering from 2013. Shell-o is a pink-based coral jelly polish that is bright and fun for summer. Too bad summer for the most part has been feeling like fall  :( Luckily the weather has FINALLY been picking up this week, it figures, the last week of August! But hey, I'll be happy is September turns in to an extended summer! 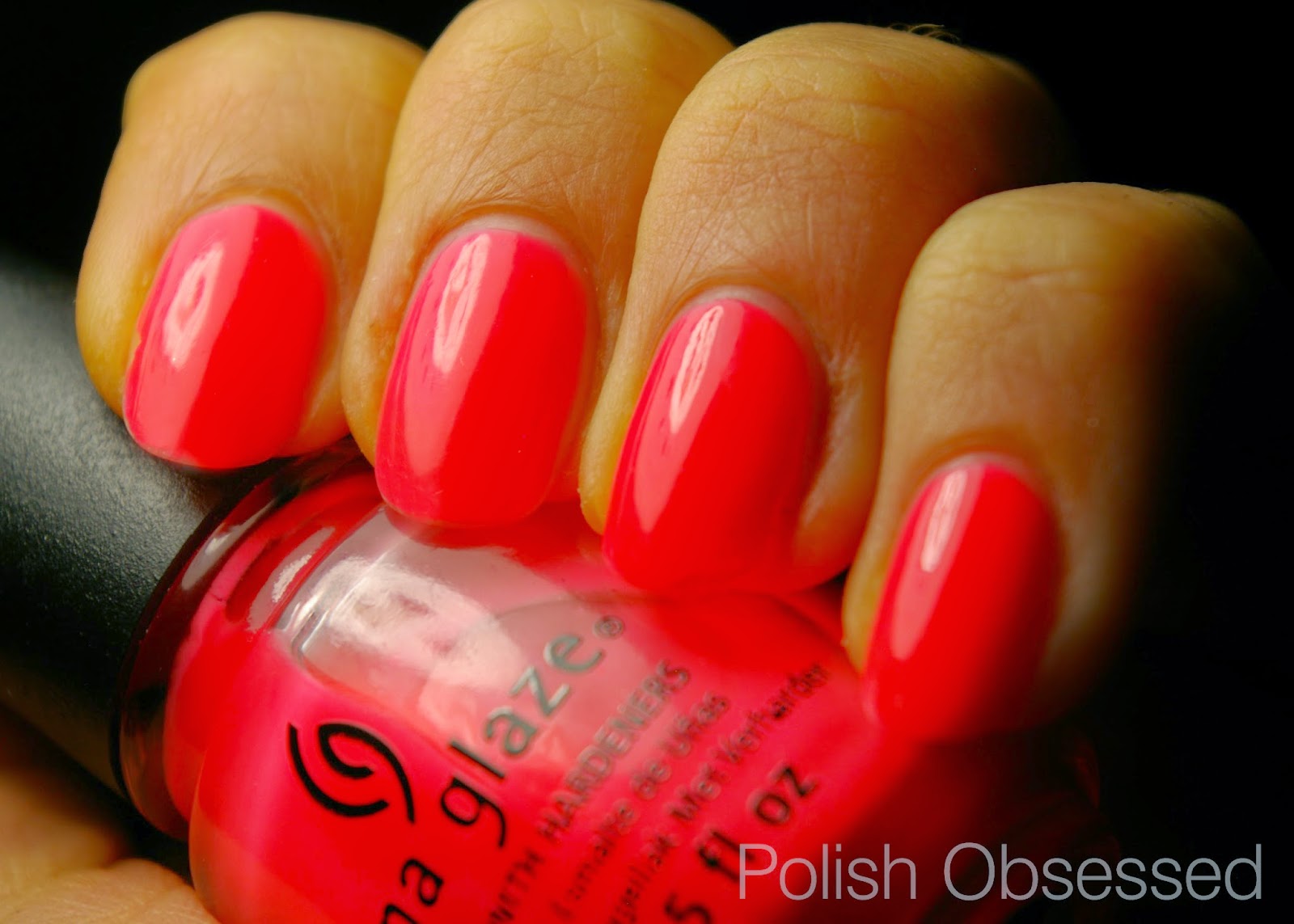 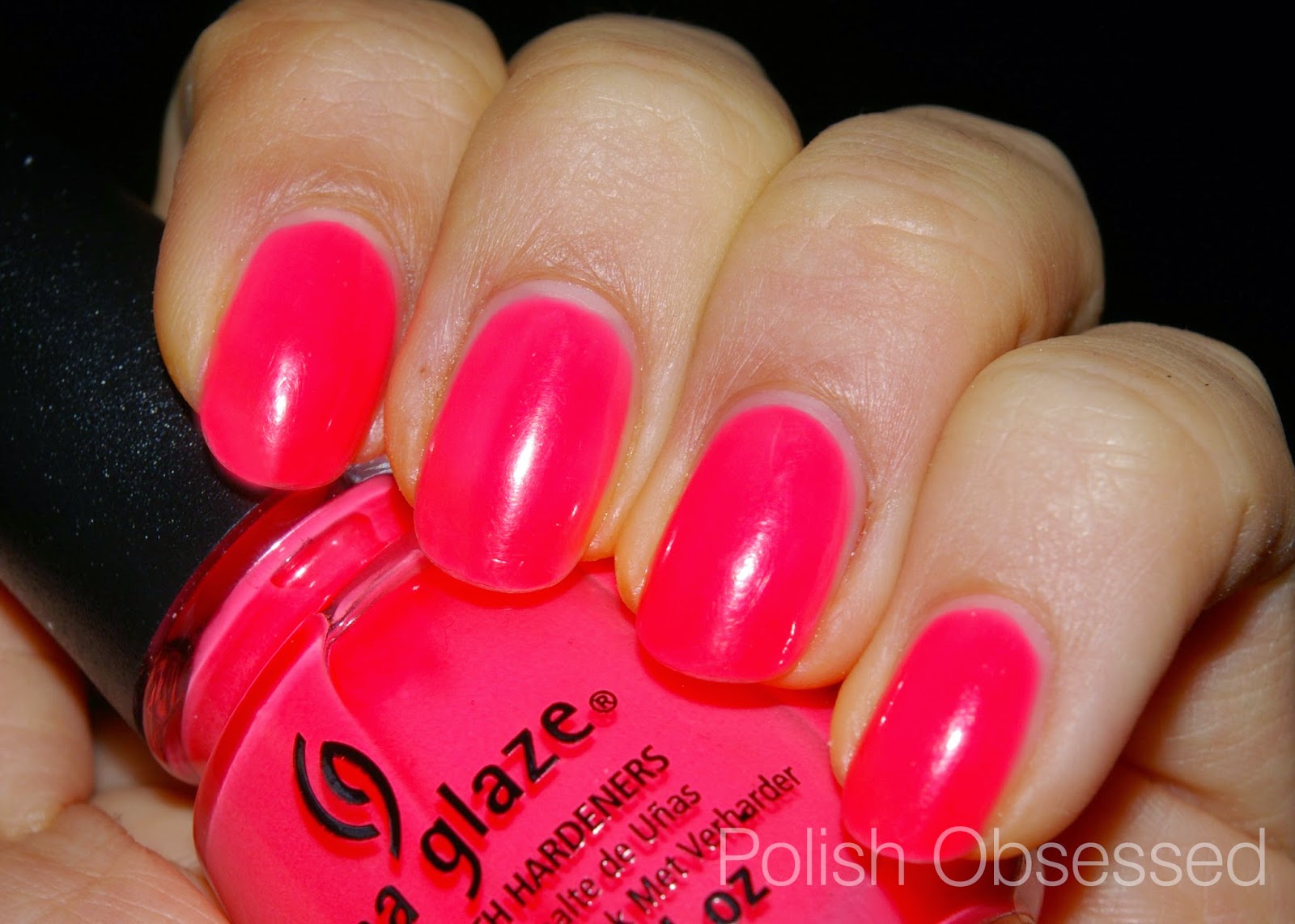 I think that is why I chose this shade of polish to wear, brighten the mood a bit and remind myself that it's still summer. The formula was good too work with, not too thick, not too thin. Since it is a jelly it is sheer. I used a total of four coats which is mostly opaque. The end result is bright and juicy, but not as squishy as I would have hoped. 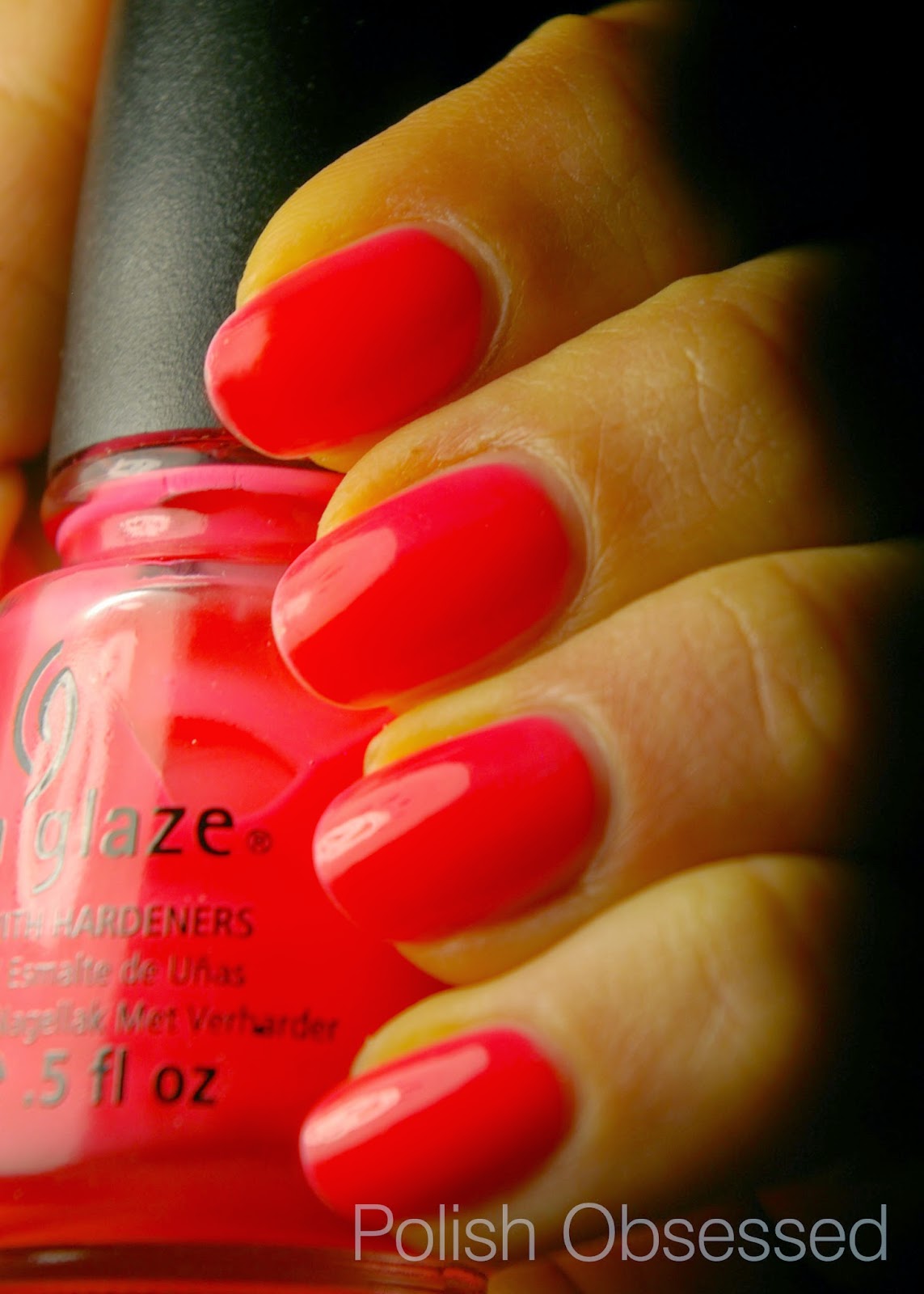 I can't recall if it dried super glossy, but I added my usual coat of Seche Vite over top to aid in drying. I wish my skin had a nice tan to really make it pop, but I do love this shade, a must have for summer!
Posted by Danielle at 9:28 AM 1 comment: